There has been some discussion of the trail modifications that are going to be installed at Tantalus side of the  Manoa Cliffs trail, and, much later, over on Pauoa Flats—Boardwalks or bridges over some of the more muddy areas, so to speak. I can not say I was too excited about them when I first heard about these proposals but I have since had a chance to talk to Aaron and I have to admit I fully understand where he is coming from, even if I still do not fully agree with the proposed solutions. I’m writing this little blurb to let everyone know the reasoning as I understand it, and what I see are the implications for HURT runners in general.

Aaron is basically concerned about the fact that in many places the trails are spreading out and swallowing up the trail side vegetation. His concern is primarily his forest reserve and not so much the idea that the boardwalks will keep people’s little feetsies from getting muddy. He sees the boardwalks as a way to keep people off the untrodden areas and to allow those areas that have been beaten down to come back a bit.

I think some of the problems can be solved by better drainage planning and construction of water diversion berms on the trails. I’ve done that before and saw some improvements in the trails that we worked on. However I see no solution to the problems that Aaron is facing in many places other than the what he is planning to do.

I do believe we all can help limit the need for these boardwalks, and keep the trails more natural if we think about a few things when we are running. There are not a lot of us out there but we are out there often, and it can have a heavy impact on the trails we run. We often find new lines up or down a particularly difficult section and if you look at these lines you can often see that others follow in our footsteps some time later. New lines do not always widen a trail, but they often do. The smoothest lines are often along the sides of the trail, or along the edge of a drop off, or they cut off small sections. The edges are where the roots and rocks are still covered with top soil and the path is the smoothest.

I believe that the primary thing we can do out on the trail is to stay to the center of the existing trail. This is not easy, nor is it efficient, as we can all see that there are quicker and more efficient ways up or down a section than running the center line. But it does keep us off the areas that Aaron is trying to protect. And it is likely to prompt others to follow in our footsteps. My suggestion is that when you run, instead of looking for the comfortable line, simply try and run the center line. It will take a bit of time to get used to this concept, but I think it will help to reduce the trail widening and creep that is going on in may places. If it achieves that it means that Aaron will not have to put in as many boardwalks, and he can spend more resources on real trail maintenance, which is where we would like to see him spend his time and money.

I urge everyone to give this some thought the next time you are out on a training run, particularly in HURT Loop country. Ask yourself if the trail is wider this year than last. Think about whether you have run along the sides of some of those wider areas, of if your ‘best’ line is far from the center of the trail. Being a middle of the road kind of person is not usually my cup of tea, and it is not something I would often recommend to others, but in this case, I think it can be viewed as a challenge. If it is harder to run the center of the trail, then why are we whimping out and letting our lines creep toward the soft and easy zones? If we are as tough as we like to think we are then the center line should be the line we can and will run. The point is that if we don’t help keep the trails relatively narrow then Aaron will be forced to put in more walkways and before we know it the hardest parts of HURT will look just like a romp along the old Pairadice Park boardwalks.

Trail Work, Saturday 2 December. Mahalo for coming out! It seems that the HURT 100 course has again lived up to it’s reputation for not making anything easy.  Heavy rain and wind forced us to cancel the scheduled work on Aihualama Trail. Mahalo to those who braved the elements this morning to show up in…

Aloha Runners!  FYI, a brief summary of the meeting held 15 February 2005. 1.  Poamoho Trail access is still being negotiated between Dole and the State.  When signed, the public will have access directly to the trail head.  Per Aaron, this would be a "killer" location for a trail run! 2. Trail Club clearing agreement … 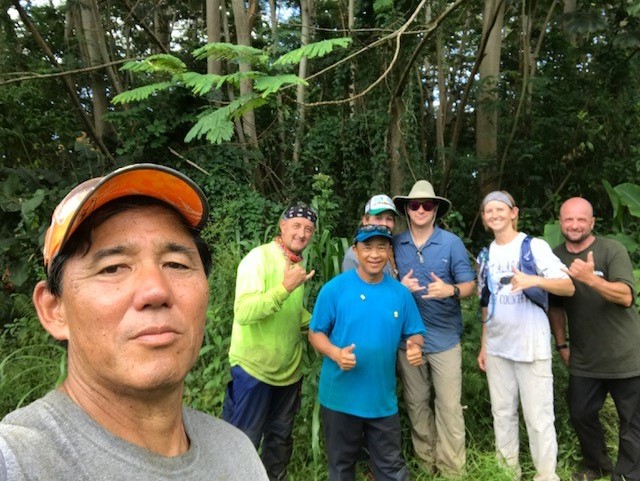 Thank you to ALL VOLUNTEERS who came out over the last 4 weekends to clear out the old trail of Maunawili. We found the trail in its worst condition anybody had ever seen or experienced. Every week we tried to clear the trail, word got around, and the list of volunteers grew and grew. From…

A couple of the same good souls volunteered to work this Wednesday morning- hope there might be a few more, we are pretty short handed!I need to know if you can help us by early this evening (Monday), so I can know how many tools to pick up tomorrow morning. e-mail PJ here if you…

Aloha Trail Runners! Just received approval from DLNR – HURT runners will be doing repair work on the Manoa Cliffs Trail later this month! We plan to correct the deeply eroded "S-Curve" section between Kalawahine and the Trex sign – this will be nice for the Trek, especially the triple.  Plans are to either regrade…

On 9-26, the first HURT 100 trail maintenance group (the MMs) met in the dark, and the rain, at Jackass Ginger. We carried tools and backpacks at 6:10 am, across the raging Nuuanu Stream, up to the top of the switchbacks on Nuuanu Trail. With Aaron’s hoes,rakes, and picks, we hacked out slide areas to…