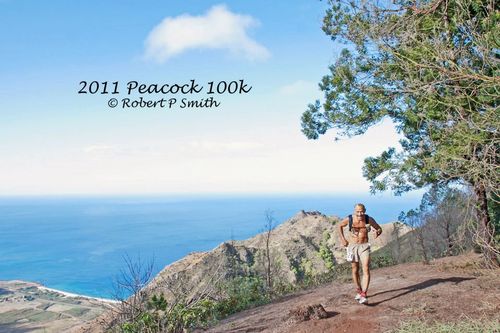 Sorry for the delay in getting these results posted. What an incredible event. Many people deserve to be thanked for all the hard work put into this race. I'd like to start with Gordon Lau who had the early vision that a race could even be conducted up at Peacock. Certainly Larry Inouye and Don Fallis played a big role in the early beginnings of this race and have continued to stay involved. It was great to see Don at the bottom of Long Road. This year Rob Lahoe stepped up as co-race director and added even more to the organization and development of the race. There are so many others who contributed too. Having an additional aide station run by Freddy and Heather was a real treat and they made it look and stocked it like a mini HURT 100 aide station.

Over at the base of Long Road, I know Don, Vernon, Leon, Clem and Johnny were all there at certain times and I am sure there were others too.

Back at the Start/Finish, Cheryl, Johnny again, Leona and also probably others I missed were all huge support and help.

We also want to thank Ray from Runners HI for hosting the pre-race meeting and all of the other contributions he made to this race. I believe Rex helped with water from Menehune Water as well.

We certainly want to thank all the runners who participated. It is clear that everyone took this race and the difficulty of it seriously and did the homework of training hard before the race. Congratulations to all who finished.

I am probably forgetting someone, my apologies.

There are probably some mistakes as I am told the pages were wet and hard to read. You know your time–that is all that matters.

Watch for more photos to be posted here. Robert Smith has been posting some incredible photos on Facebook and will probably place some here as well. There will be other photos posted from the finish line in the next day or two.

As Mike says, this race is done and it is time to focus on the next big event: the HURT 100.

Julie N. and Jan M. went to Maui recently and participated in this run put on by Valley Isle Road Runners. Click here for a race report by Julie. It sounds like they had a good time.

Just got an interesting story from Fish about his encounter with Leo this past Sunday afternoon. He went for an ‘easy run’ Sunday afternoon in his trade mark attire: Army Pants, High Sierra Hydration Pack with attached Bear Bell. His intention was to enjoy a quiet afternoon on the trials but unexpectedly spotted Leo upon…

Today we learned missing Navy Seal was one of our own, Matt Leathers. Matt finished the HURT 100 in 2012 and also participated in the 2013 race. We are all extremely sad about this loss. My own personal experince of Matt was limited. I remember him from running up at Peacock in 2011 and Barbi and…

Marshall Ulrich has a new title as he is the first person to complete the "Triple Crown of Extreme Sports" – ultra running, adventure racing and mountaineering. http://www.fortmorgantimes.com/Stories/0,1413,164~8318~2737467,00.html At 53 years old, he is about to complete the "seven summits", climbing the highest peak on all seven continents. He has many running accomplishments including 10…

We were at a surprise birthday party tonight for Darin Mingo and met Richard Varley. Richard is very much involved with Keiki triathlon in the islands and it just so happened that Jakob Dewald was a featured athlete in an article in the Star Bulletin today. Click here to read the article. Click to enlarge…

At TTT, we were joined by Brenton Floyd and his grandmother "mamabetty", his handler, in Brenton’s effort to complete his SECOND round of marathons in all 50 states and D.C. Greg Cuadra, Nancy Gandy (finishing her first ultramarathon!), did the TTT the following day with Brenton. Cheryl Loomis, Kelly McPherson, and PJ Salmonson did the…