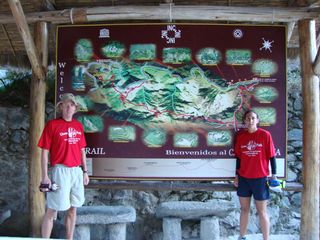 First thing I must say is that it was a less than ideal time for us to do it.  I had gotten reinjured a week after the April HURT race and missed about four of the next eight weeks with no running whatsoever.  Gina was recovering from a recurring stress fracture (same shin as the year before).  We were both out of shape and neither had run more than eight miles since mid April (when we reinjured ourselves).  When we originally planned the trip over the winter we had seen there was a marathon going on when we were going to be there and thought – perfect!  We looked at the times and figured we could do pretty well and maybe go after the win if we were in shape.

Next thing is that through some error we had not signed up for the official marathon that was being held that day (June 10) but had instead accidentally organized our own event – just the two of us.  The official race was a little wimpier and competitors had hiked in to the 88km mark, 6km up the trail from the official start.  Their marathon ended up being only 39km, not quite a marathon.  They started a half hour before us with an 8km head start but we still passed all but four of them. 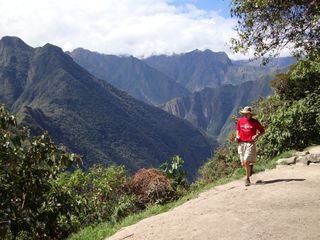 Anyway, it was an incredible journey and the injuries did not play any part in the run.  Gina was recovered and the slow plodding along on the trails did not seem to bother my hip more than just hip tightness.  We started at about 6am from kilometer 80 on the road to the train station that tourists are now required to use to get to Aguas Calientes, which once you get there a bus takes you from town up to Macchu Picchu (January flooding washed out the tracks between km 82 and Cusco, where tourists used to depart from).  With us we had our required guide for the Inca trail, a local by the name of Santiago, as we had set up our excursion through Llamapath in Cusco.  We had met Santiago late the night before at our camp site and he had just returned from being a guide on the usual four day backpacking of the Inca trail.  He found out that night that he was heading back out the next day to do the whole thing in a day!

The road from kilometer 80 to 82 was dirt packed and faster than I thought we would go at the start, given the long

day ahead.  At kilometer 82 we hit the train station and the start of the trail.  After getting our passports stamped we were on the trail.  The 45km distance officially starts from here and ends at Macchu Picchu.  The first 6-8 km was undulating single track dirt trail along the river.  It went through small local villages (of four huts) where locals commuted from on foot and horseback with donkeys and gear in tow to the train station area where they either sold to the tourists or went further up the road.  We learned pretty quick that the donkeys will not get out of your way, you either move or get run over!  Just past the 88 km mark, maybe a mile up, the trail starts to climb – a lot!  Over the next 5km you climb over 4500ft up to elevation at 13,779ft.  Passing throngs of tourists, porters and guides heading up, we heard comments about “crazy runners” but also sensed a bit of jealousy at how light we had it – just a water bottle in hand.  I can’t describe the scenery on the way up and the view from the top, you have to experience it to understand the shear beauty of it all.

From the top of Dead Women’s Pass you get onto what is truly the old Inca trail, which means you are running on stones for most of the rest of the trail.  The trail quickly and steeply descends 2000ft before going back up 1500ft and then down another 1500ft.  It is all rock hopping on slick rocks and the porters who carry other’s gear (75lb packs on their back) are surprisingly quick.  I think Gina passing them (a girl passing them!) gave them a little motivation, and they started flying down those trails, a couple of them passing us with packs on their backs!

At the bottom of the last 1500 descent at Chaquicocha and 30km since the train station, the trail starts to meander and weave in a out along the side of the mountain.  Truly the best running since the beginning of the trail, this was an area we made up some time on.  Reaching the third pass (still at 12000ft), the biggest descent was in front of us, descending 3500ft in just 3km.  Rock stair after rock stair we just kept on going down.  Gina got a few “chick runner” shout outs and as she is better on the technical trails she opened up on me big time going down here.

At 40km we hit the last check point and after a holdup because our guide had our tickets from the morning and we had opened up a lead on him, we made it through and onto some nice dirt rolling trails to the Sun Gate.  At the Sun 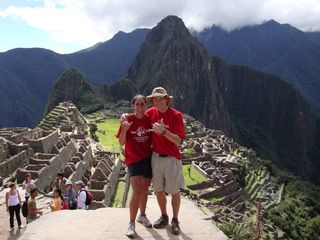 Gate Macchu Picchu is in view, a spectacular event on the trail.  This is what you are here for!  Mountains towering around you and the newest of the wonders of the world below, it is a great feeling.  Heading down about 1000ft from here over a little over a mile, we soon hit the 45 km mark and Macchu Picchu.  Gina had set a new speed record for women on the trail, covering the 45km in 6:02:25.  It was here that we met the actual race director, who was not happy we had crashed his race with a rogue tour group.  I wouldn’t have had it any other way though as we actually had covered the marathon distance (a little more actually) and had experienced a lot more.  At this point we were closer to 6:10 overall time counting the two kilometers from the start of the day and after some pictures and taking in the view, we finished off our 50km by heading down the trail 3km to Aguas Calientes.  This was another 1000ft or so descent on better trails and still hyped from the Macchu Picchu experience we flew down this just wanting to finish.  At the bottom just across the bridge we finished our 50km journey in 6:21:58, which I believe is another record and the first recorded run of such a distance on the trails. 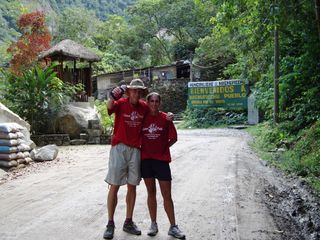 Pleasantly tired we enjoyed Aguas Calientes that afternoon and evening, taking in some of the local dark beer over dinner (Cusquena).  The next day we would tour Macchu Picchu and really spend some time exploring the ancient city of the Incas.

Overall an incredible experience!  I would be happy to share any particular details or logistics for planning such a trip and highly recommend it to any of you adventure seekers out there!

A Hurt Loop training report by mnmuench… Paul provided his report, which is an accurate but most modest account of the events of the Friday night run. This run was Paul’s. He did one hell of job looking after everyone and ensuring that the water drops were cafe stops.  I just want to add a…

Aloha Athletes, Doug Long completed the Hardrock 100 Endurance Run in Colorado. His time was 46:57. Congratulations to Doug and his support team including his family and pacers, Huddy, Scott, and Cheryl Ridlon.  We can't wait to hear the full details and hope (hint-hint) to read a full race report once you get rested up and…

After a stressful 6 month sabbatical and binging a little I am now sober and back to running.  I have been in California since Dec. 26 wainting for my divorce to go through and started my running two weeks ago with a 7 mile trail run (1:45).  Then it struck me hard…..the fever broke and…

Maui in the Madness of Moonlight  MikeM and Julie T. bring you another in the mad mad run concepts Gang, here is your chance to see Maui by the light of the Full Moon. This is a run of a lifetime. It includes every run you have heard about on Maui in the economical period…

Dean Karnezes has been getting all of the attention but Pam Reed isn’t sitting still. She will attempt 300 miles on Easter weekend in the Tuscon area. Pam was the overall Badwater winner in 2002 and 2003. In 2004, she placed second behind Dean Karnezes Click here for the full article.