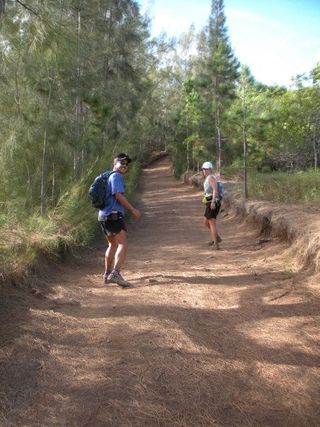 Sounds like the gang had a great training weekend up Peacock way. For those of you who couldn't make it or are unfamiliar with Peacock, Wily Woo posted some great photos on Facebook. Click here to see them. By the way, where do you get the plate of food up Peacock way? I don't recall any restaurants up there.

Mike Muench continues to amaze me. Running all night up at Peacock and his upcoming 60 hour weekend. Go Mike go! Maybe that should be run Mike run!

While I have not been running up at Peacock much, I have been riding my mountain bike up there quite a bit. I am not convinced riding up there is any easier than running it. Even Barbi had some good laughs reading Mike's Ode to the Road as it feels the same biking (or worse) biking up the long paved road.

Speaking of biking–a couple of things. We spent some time this weekend out at the 24 hour mtb race out at Kualoa. We didn't race it, just used it as a good excuse to get onto Kualoa property to ride and train for XTERRA. However I do want to mention a couple of things. One, the mountain bike community here knows how to ride long and throw a party. It was really fun. While there was some pretty good partying going on, the riders who were racing, were putting down the hammer. I was impressed by the first place all men's team 40oz of Freedom. They were ripping off loops for 24 hours.

H.U.R.T. runner and biking maniac (and I say that with all respect), Maurico Puerto rode something like 27 loops (135 miles I think) solo on a (pink) single speed bike. UNREAL dude!

Equally impressive were some of the ladies who rode all night long and put up big miles.

We fed a big bunch of riders breakfast burritos this morning. Just like at the Nuuanu aid station, they were a hit. This is Barbi's secret method of recruiting volunteers.

Finally I want to mention something, the Furnace Creek 508 took place. It is a 508 mile bike race put on by Adventure Corps, the same people who put on Badwater. I am not sure the exact route but it covers some of the same hot roads that Badwater does.

Charlie Engle who is signed up for the HURT 100 finished in 4th place overall. He won what is known as the Death Valley Cup which is a combined time for both Badwater and the Furnace Creek 508, setting a new record by 1 hour and 20 minutes. If you don't know much about Charlie, you can learn more here.