While some of you (over 135 runners, and 30 volunteers) were out on the North Shore frollicing in the Heat, the world was still spinning.  I attach this article from this morning's paper. ..Kalapu Ulavale

For Semi Kalakalaeipu it one bad day for go surf.  Even before da bugga get into his stinky wet rash gard he go find he no can.  For Why?  Well brah, it cause da kine buggah live North Korea, went fire one super size bottle rocket which went come all da way hea.  Dat right, and it come down on Semi’s almost-new-wen-steal-town-side board he find abandoned jus last week in Wallace Chun’s garage.  Wallace one town side pake who never go use ‘em anyhow brah.  So Semi jus liberating the juise.

So Semi went put his board down in the sun for melt da wax, and then he busy with the manogi kine rash gard, when bang!  He hears one beg boom, and where his board was is now one big ass Korean Rocket Ship brah.  (For see da size look pectures)  For Semi dis one tramatic experience.  “I wen tru too much pilikia git da board, you know.  Now da kine Nort Korean pule, gone smash ‘em all up.  Dis one almost-new-wen-steal-town-side board brah. Git plenty meaning to my local heritage, and I no can replace, cept for da other one I go git Chun’s garage bumbye.

Local Surfing Kahuna Ace Ka’amiloulo Fitzroy has condemned the North Korean attack.  “Dis just another one time when outsiders destroy our cultural artifacts.  What Semi gon do now.  Cos plenty gas go townside for night visit to Chun’s garage.  His almost-new-wen-steal-town-side board is a great loss to our cultural heritage; like all dah other stuff we went forget in da bush. Plus Semi no can sell da board to one stupid hauoli tourist fore Wallace and his gang buddies come northside lookin for thief went cockaroach his board. Jus another instance where locals suffer cause of outsider interference in our cultural heritage.”

Fitzroy, who one mainland lawyer who come north shore many years ago, smoke too much dope, and forget he married to wife with five kids, plans to file suit against the City and County, the State, the U.S. Government, and the North Korean Government for the loss of cultural artifacts, and the trama caused to the north shore surfing community.  “This one terrible event you know”, said Ka’amiloulo.  “When first happen Semi no believe da rocket wen hit his board, and he make beef wid all da braddahs on da beach for steal his almost-new-wen-steal-town-side board.  Plenty people git all bus up for that.  One blalah wen break Simi’s nose and two others cheap shot him when he on the ground.  Simi go suffer PTS.  Unlikely he ever be able to drive town side for cockaroach again you know.”

Police finally arrived to assess the threat of the missle. They no aress nobody, take a few pictures and go to lunch.   Councilman Charlie Dejon has promised to seek passage of  a law against the landing of Korean Missles on the North Shore. “This is a matter that we can talk about for at least a year or two.   What if it had hit more than one board?  Did anyone pay a tax to land a missle on the North Shore? There are a whole host of inane issues we can debate that certainly come before how we pick up the trash or pay to have the roads paved.  Excuse me, I’m late for my political fund raiser.”

Right now it uncertain what to do with the missle which went stuck just outside Jamesons Bar.  In the mean time the bar has filled it with ice and is using it to cool beers over the holiday weekend.

The Peril Close up

Proof of Origan, as if we needed any!

Wait!  Where did you say North Korea Is? 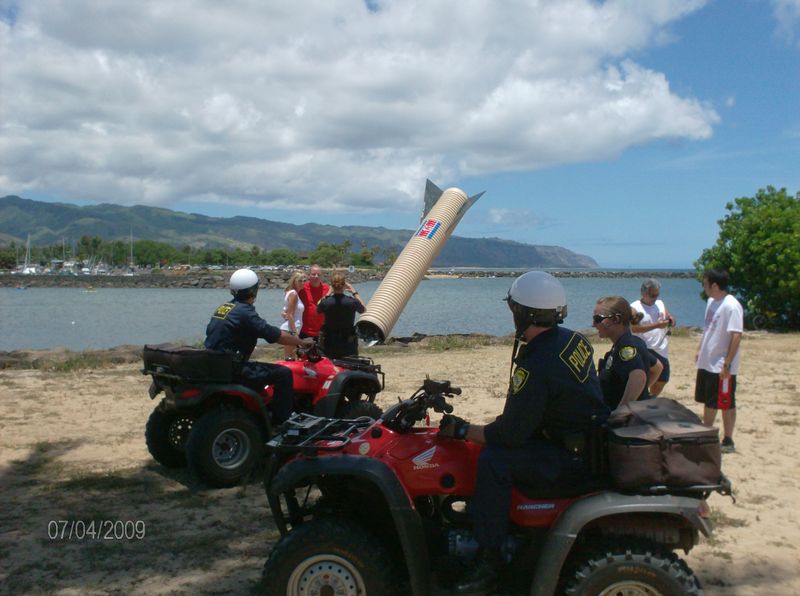 Police were on the scene….until Lunch Time.

For those who missed it, you can click here and see all the fun running times you missed during the the SweetHeart's run. Neal and Marian know how to throw a party!

I don’t know how many times in my life I have gained a new perspective, only to lose it again. I do know it is many. It continues to amaze me how easily we take the blessings in our lives for granted. Picture this: It is 0330hrs, it has been raining for nearly two weeks…

On Friday November 9, health permitting, I, Mikem, will be heading out on another birthday run. Last year I let the Peacock 100K function the dual purpose of race and birthday run. This year’s Tsunami edition limits my ability to revisit that artifice, and I find myself forced to actually run a birthday run, which…

Aloha Athletes ! This Saturday will be a repeat of last Saturday…meet at 7:00 am at the Pumping Station at the corner of Makiki St. and Makiki Heights Drive…do roughly a 9 to 10 mile loop through Manoa, followed by a 10 mile round trip up Tantalus Rd. to the top of Concretes/return. A few people…

Jan McGriff recently went to the mainland for the San Diego 100 Mile Run.  It is a great report and a reminder that things don't always go as planned. She sent in her race report which you can read by clicking here. The two photos here show Jan at the start and also as she…