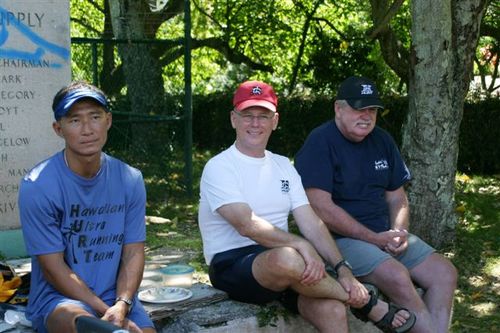 I got an early call from Cheryl this morning that we had lost another HURT runner. Not lost on the trails, lost as in no longer with us.

Pete Martinez is much of why this site even exists. Pete's business was creating web sites. He started creating sites in 1994 for companies large and small. Back in late 2004 blogs were the newest form of web communication tools and he and I started discussing the idea of creating one for HURT. He told me to just do it! Pete was like that; outspoken, direct and very good at what he did.

With HURT, I don't think Pete cared much for the races, that isn't what he was in to. He enjoyed time out on the trails. He enjoyed being fit however he also recognized and believed that continuous and longterm running was not necessarily the best thing–at least for him.

For those of us who remember Pete, one of our greatest memories and why the nickname; "Pizza" Pete, is he had the uncanny ability to show up at the least likely time with wonderful warm cheezy, pizza. Often times in the middle of the night, on a wet and cool night, it was always a welcome sight to see "Pizza" Pete!

The other role Pete played many times was parking czar. There he would be at 0-dark hundred, not allowing any cars past him.

Pete had another passion and it was probably one of his strongest interests: windsurfing. He had been involved with windsurfing for years–back when Kailua bay was the epicenter and continued to search the island for the best wind. Click here to see him in action.

Pete was very involved in local business networking including HEA and SMEI.

At this point I don't know any more. This is a Facebook site: Memories of Pete

Pete, you influenced and impacted a lot of people and you will be sadly missed.

If you have photos or other stories about Pete, please either post in comments below or send me photos and I will get them posted.