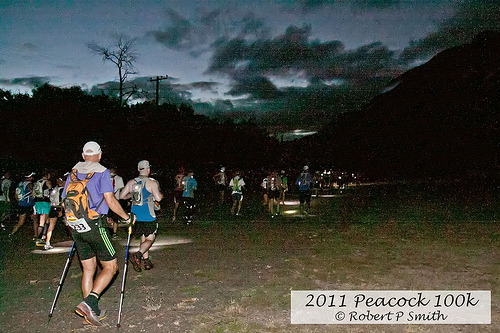 Mike M at the Back of the Pack
Don called me a few days before Peacocks, excited by the upcoming race, more excited than I  that’s for sure.  I was dreading it.  Pecocks had come up on me far too fast, allowing very little training. I’d done Are’s twice, the Lower Loop twice and still didn’t have names for any of the subsections. I just didn’t know the course very well, didn’t think I could finish it, and was mentally only going out to do one loop because Gordon said it was OK if I did only one and then worked the aid station at Long Road.

The only hope was that Rex and I had done the first sections of the first loop and pronounced it ‘doable’. Doable in that kind of iffy-maybe kind of way that we back-of-the-packers look at these endeavours.  Doable in the sense that if every thing goes just right then maybe, just maybe, we can finish the damn thing before they ring the bell that signals the clearing of the aid station tables, the removal of the chairs and water jugs from the finish line, and an empty field at the finish.  Doable, just doable, and no more.  But that was the outside chance, and I was not cashing any gold shares to bet on my finish.

My knees have been hurting me on and off for a year now, and I had aggravated them again with some Peacock training and some bad shoe choices. A similar problem had haunted me last year so this year saw an early return to some stockpiled ‘old faithful’ shoes, and I manged to bring back my knees a bit.  But I still could not go down Long Road without a lot of pain and soreness. The fact was I could walk backwards down the damn thing faster than forwards.  The issue of knee pain is bothersome to say the least.  My time-bomb clock it ticking and I know it.  Peacocks is a miserable test of stupidity if you have leg issues.  So, ‘Doable’  is just sad theater, a kind of tragicomedy of an ultra-running sort for old guys with short running lives ahead of them.  And I was doing Peacocks?  It was theater of the absurd, and I knew it!

So, There you go. Is it any wonder I was not excited when Don called?  I just did what I had to do to prepare, realized I didn’t really want to be doing the run, and tried all the harder to make sure that I did just what needed to be done. There would be no heroics out there, just one long managed push. I loaded all my tricks into a bag, and at 4:00 AM Saturday morning Ed came by my house, we picked up Fishy, and away we went to Dillingham.

I’m not going to go through all the things I do to prepare for these insanities, but let me assure you I did them.  I reluctantly found my way to the start, hung back, and waited for Gordon to start the race. This year was much more formal.  I believe it was last year that Gordon said something about Peacock’s, jumped off the bed of his pick-up truck and was gone running up the road.  It was at least ten seconds later that people realized the race had started.  This year Gordon led us over to the chain gate, said something about Peacocks, and was gone up the road.  The increased formality helped the slow witted, who generally hang at the front of the pack, and Gordon had a much smaller starting advantage.