Skip to content
Just got this email from our HURT brother John Robb.
John relocated to Japan last year.
He'lll be back on Oahu in January for the HURT 100…
-sv
Aloha  HURT
I have greatly missed running with you all!
I have been running and racing a bit here in japan. While the races (and most trails) I've done are all hurt worthy. They do things a little different.
The races are all very crowded. Like 750 at Uenohara ,1500 at Kitanzawa, and most recently up to 2500 at the 19th annual Hasetsune cup! 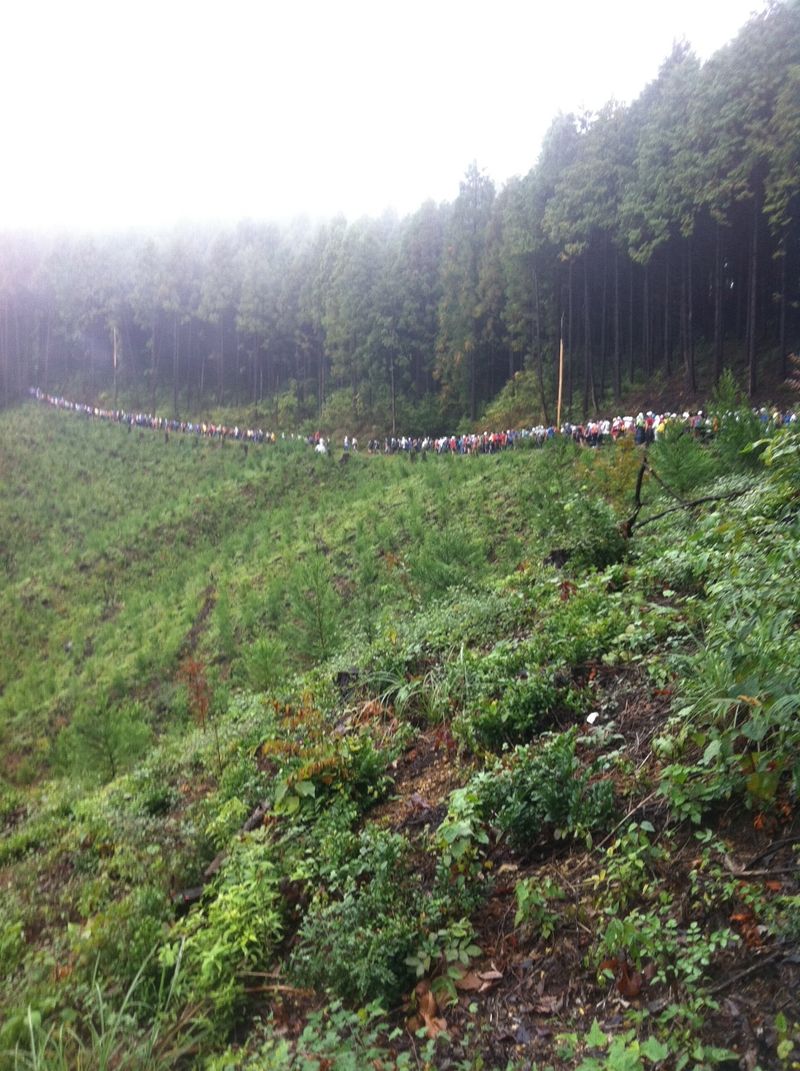 Also aid (if any) is…meager. At thos first two aid stations had h2o, bananas, cucumbers, and rock salt. I ran thru another station thinking it was a bait stand for anglers at a nearby lake!
And that post race feast? One bottle of the local sports drink, and a happy meal size udon bento! If you want more bring your wallet!
But that's not why we race.
Hasetsune hasagawa was a revered Japanese alpinist. He perished somewhere in the Himalayan Mts. In the 80's. The hasetsune cup race course follows one of his routine training runs.
The race is said to be one of japans most difficult and prestigious! It is so popular it fills in a day! I couldnt guess how many non Japanese runners were there besides me. If any.
We started in a light drizzle, @63f, at 1:00pm. I seeded with the 12hr runners feeling optimistic. We had 1km of road to sprint to the trail. I did my best to keep up!
As in the other races, once we hit the hill, we slowed to a crawl. The next ten k's would be really slow. But that was cool…this "hill" would last for the first 36km!  Not all up. Picture 20+ miles to Mt Olympus, or Aiea ridge.  As we move onward and upward, the crowd started thinning. Each small hilltop looked like the best place to take a nap for many. Others chose a place that looked ok on the steep climb!
In this manner I was able to pass hundreds. Like they were standing still!
Treking poles are very popular. And they hurt! I was whacked on the shin (by accident I hope) passing a slow group, on a steep hill. I had to get by, I thought he would poke my eye.
Another came up fast behind me, swinging his poles like swords. I stepped aside to let him pass. He looked over, and called me a "domo"
It was steep, but I managed to pant out "sticks and stones"….but now it was go time. I matched pace with him till he collapsed for a nap at the top of the next rise. I kept moving.
After 36k ascending from 200m to 1527m I was ready for some serious downhill! We all moved fast down and then over one more small peak. Soon we reached 42k and the 1.5 liters (only) of aid we would see on the course. Unless you know where the good streams were. There were some, but 10-15 minutes off course! 2 streams were on the trail but not until about 60 k!
Now only mts. Gozen (1140m),and Otake (1266) lay in the next 10k! And I was in familiar territory. And moving (and feeling) really good.
After climbing Mt Otake (literally) it's steep and rocky. 4th class, easy 5th. Some chains and ropes. But it was over fast. 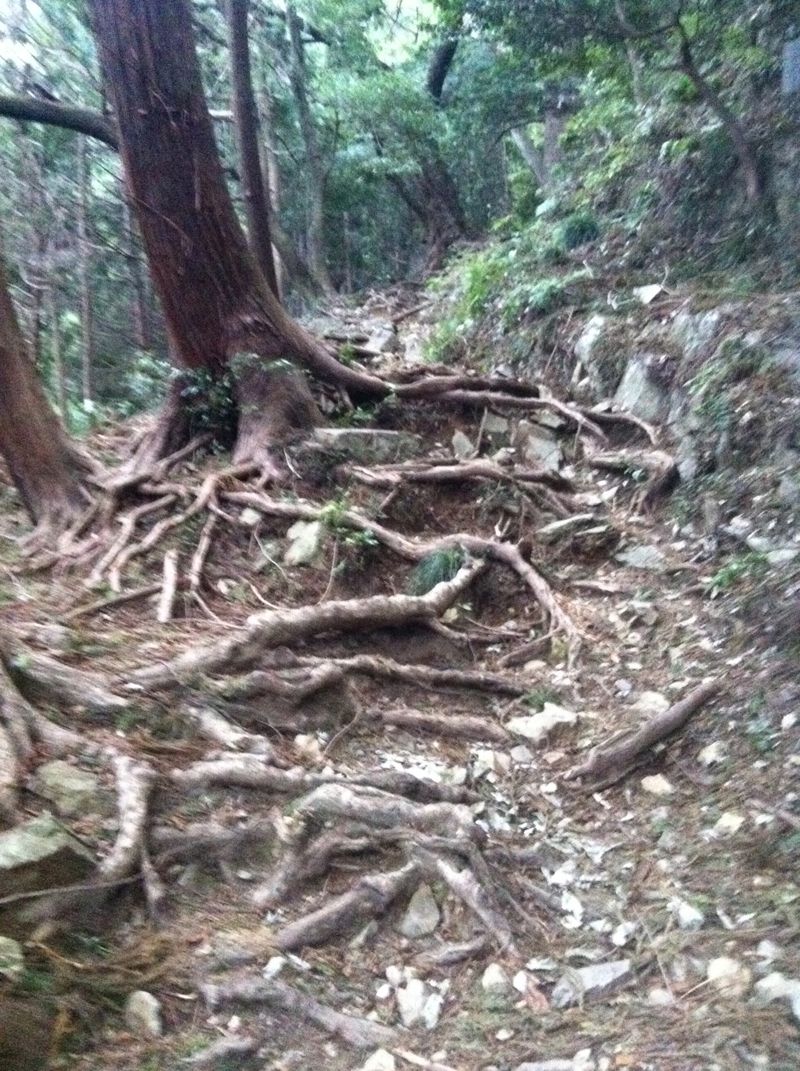 (does this look familiar?)
Now a fast traverse to Mt Mitake, then down to. Up and over Mt Hinode. This has some painful and treacherous ancient stone stairways. But soon I passed the 60 k marker.
Then it was all down hill. I had to stop once to change batteries in my headlamp, and my favorite "downhill at night" secret weapon: my hand held "fishlight"!  Then one more bit of aid! Someone dropped a blueberry gu rocktane! Now I was flying! I passed the dozen who passed during my battery change, plus half a dozen more!  I slipped on my ass once but hey… The pain came later when I realized I lost my un-bottle!
Now there's the 72k finish!
I run in strong at 13:47, 361st place!
I plan on doing another lap in late November (faster,solo,daytime) in preparation for HURT 2012.
See you then!
And have a good time at the Peacock 100k!  I feel sick not running it.
I like it in Japan… But I love it in Hawaii !
There will be a Fuji trail 100 miler in the spring (it's full)!
But the Nobayama 100k is may 20!
Supposed to be hard.
If anyones traveling!
Aloha  John Robb

La Sportiva and Golite have launched a new web site promoting trail running and their mountain running team. Click here to check out the site!

As site monitor, I have decided to delete recent comments that have been appearing on this site in regards to the selection process, training and race entry. Pretty much this has been an open forum and people comment, post and reply on their own and I let it go. I have not liked the tone…

Aloha Athletes ! It's that exciting time again, the kick-off race of the 2011 Hurt Trail Series…the Moanalua 6 Mile ! Christian will be posting details, so stay tuned. For questions, you can call him at 282-9547 or e-mail him at hpucrosscountry@gmail.com. For those of you presently training for ultras, there will be a small group training…

Aloha runners: The final preview of the Maunawili Out and Back run will be at 6:00 a.m. this Saturday, July 28.  If you are a novice piggie, and have not done the course before, it is advised that you join in for at least one preview.  If you are an experienced piglet, come join in…

For All of the Brave Souls Who Dare to Face Off With the Bad Ass Pigs:This Saturday is the fifth race in the HURT Trail Series 09.  The Maunawili Out and Back is a 22-mile trail run that starts and ends at the Pali Lookout.  The race can be done solo or as a 2-person…