I'm missing running in Hawaii with the HURT group.  I'm currently in Herat, Afghanistan doing security work.  One of the guys on my team, Dave Alvarez is a runner.  He started running with me shortly after he moved from his compound to my compound.  He just recently joined my Security team and we've been running together 5 days a week since.  He's kept track of the miles we've run together and it's over 100 miles.  Not bad for less than four weeks.

Being in a war zone we just can't walk out of the gate and go running.  Well maybe we can but it would not be a good idea.  Fortunately we live in a rectangular shaped compound.  If we hug the walls we for one lap we get .26 miles of unobstructed running.  Such a short distance basically means we're running in circles, clockwise one day then counterclockwise the following day.  The furthest we've run at one time inside our compound has been 10 miles.  Do you how many laps that is clockwise?  How about the number of laps counterclockwise?  Answer= A lot, no matter which direction we run.  Good thing I have my Garmin GPS to keep track on the total distance we run each day.  I tried counting laps but usually lose count after 10 laps.  As boring as it may seem running laps, it does have some advantages.  The first is that we don't worry about the environment around us.  Not only are there people running around with guns, there are also some pretty big doggies.  Can you say rabies?  We also can run without carrying our weapons.

Now I've told Dave all about HURT.  He's inspired by all the stories, of the steep hills, rocks, roots, rain, lots of pain and all that other good stuff.  He's told me that one day, he would like to participate in the HURT 100 miler.  Yes, he wants a HURT shirt and he wants it bad.  I've showed him a couple that I brought with me and it's a good thing I carry a gun.  If not, he would have taken one from me at gun point. Being armed is the only way of keeping Dave away from my HURT shirts.

One thing I didn't mention about Dave.  He's very smart.  He must always thinking about HURT because during one of our runs he told me that he came up with a great name for our two man running group.  He calls us HURT, Afghanistan.  Does the name HURT sound familiar?  Now don't be alarmed.  He's not copying the original HURT.  He's honoring the name.  If you haven't figured out what HURT for Dave means, it's Herat Ultra Running Team.  And you know what?  It is a great name. 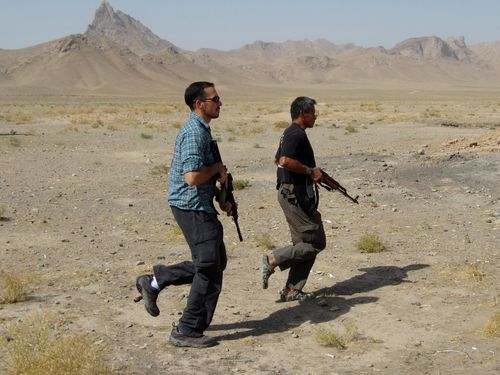 As you can see by the photo, we're not running in our secure compound.  When ever we leave the confines of our compound we must be ready for anything.  After all, it is a war zone.  Ummmm…. what's that I see on Ed's feet?  Looks like Crocs.  I didn't bring any running shoes, but I did bring 4 pairs of Crocs.  And that's all I've been wearing during my runs.
Time has been marching on for me.  I'm now on month 4 of this contract.  It shouldn't be long till I'm back home since I should be flying out of Herat on 30 September.  I hope to see everyone soon HURTing along. 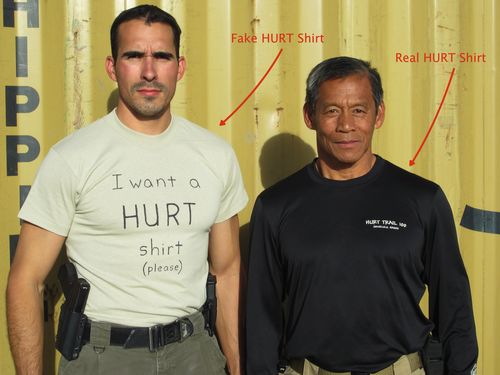 Does Dave deserve a real HURT shirt?  Just look at his face.  If you think he does and would like to send him one, please contact him at  dave0321time@yahoo.com.  He wears a size Large.  He would really appreciate it.   Mahalo and Aloha.

I’m not the best at loading photos, but here is a link to SnapFish for lack of another tool: Mt. Rainier Photos I hope it is easy to view – so great photos.

As mentioned on the Ultra list, there was a great article in USA Today on ultra running. The article is focused around this past weekend’s Massanutten race, however it has some pretty good information about ultra running in general. Included is a mention about winner, Matthew Estes, and his troubles at the H.U.R.T. 100 in…

Aloha I just got this months issue of Ultrarunning and as I was flipping through I came to page 55.  There they were, a picture of Mike Garcia and Patricia Carroll out running the Squaw Peak Trail Run (50 miles).  They came in 16:48.  A job well done you make me proud.  Can’t wait to…

Finished!  All photos I felt were worth processing and posting have been.  It was actually quicker and much more enjoyable to pace Loop 2 than it was to do all this post event processing but that’s all part of capturing and preserving the memories in the best possible way.  The views and scenery at Peacock…

Aloha Athletes, Doug Long completed the Hardrock 100 Endurance Run in Colorado. His time was 46:57. Congratulations to Doug and his support team including his family and pacers, Huddy, Scott, and Cheryl Ridlon.  We can't wait to hear the full details and hope (hint-hint) to read a full race report once you get rested up and…

This is what Lisa and Sister Mary Beth looked like at the end of their 44th day of the Running Hope Through America (RHTA) project. Smiles on their faces and a feeling of accomplishment. What I am learning about these two amazing women is that they are true givers. The reason they are doing this…