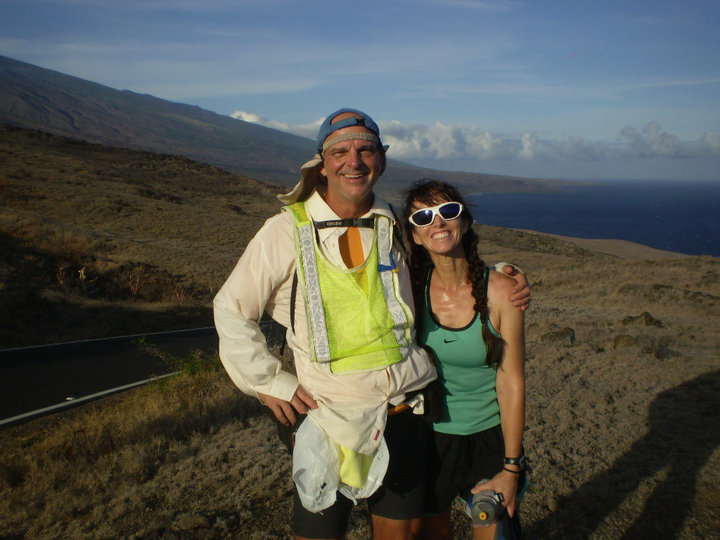 Mike and Heather far past Ulupalakua, along the back side of Haleakala.

All completed the run safely and with few problems and there was plenty of Moonlight along the coasts of Maui.   Julie Takashima did a great job taking care of logistics and planning.

Paul Hopwood was a great host and opened up his home to me when I passed through.   Zadoc a local Maui runner, came out twice to provide me with aid, and on the second took me to his home to shower, rest, and suck down a few beers.  Zadoc was the ultimate ultra runner host who took a lot of time to help a fellow runner out.

The Solo statistic: 170 Miles or so in approximately 69 hours.

The Girls time was approximately in the low 60’s

Hopwood and Jeff did something in the 50’s.

The most remarkable moment of the event was  coming around a corner five miles out of Ulupalakua on a barren dry wind swept rock bound coast, looking down toward the inky blue sea, seeing a windy jeep trail, and spotting Paul running, yes running, up the steep hillside.  They had been hours behind me on the King’s Trail, I had gone up the jeep trail at Ulupalakua, met Zadoc, and run on. Paul et.al.  had continued along the rugged King’s Trail along the coast.  Julie T. and the team, who were behind us, had driven far back on the Kula highway to gain cell reception.  She and I have Verizon, which was the most dependable on the island.  By coincidence, given the reception, I managed to contact her and have her start down the road as I sighted Paul.  I was flush with water and gave Paul, Jeff, and Heather enough to tide them over.  Heather kept up with these two along the King’s Trail without complaint, which is quite an accomplishment.  I believe it is the first place she has run where she began to understand the primitive nature of her coming Kalahari Adventure.

An hour later we were all reunited on the far side,  Maui’s Forlorn Coast. Everyone hugged, laughed, got water, fueled, and moved on.  I stood there alone once again, wondering what had happened.  I had another 10 hours of trekking along isolated beaches, ridges, and narrow valleys ahead of me…..during which, among many other things, I was accosted in the dead of night by a naked man claiming I was trying to steal his mail box…..Hana side, can’t beat it.

For me the hardest aspect of this run was the traffic.  Tourism, population and zombie traffic engineers have made the central valley and tourist zones a nightmare for runners. There are half a dozen drivers I would still pull the trigger on and feel I was doing society a favor, a few dozen who should just not be driving.  At the same time the general driving population was aware and respectful of  a single runner.  And there were many concerned people who slowed or stopped to ask if I needed help.  But the constant awareness demanded by the traffic drove me near insane.  I came off the roads crazed and reactionary;  a far cry from the Zen like experience of the Big Island 2Seas2Summits. Days later I still feel the heat of rage on the back of my neck, and the desire to point a sight at cars that I continue to hear buzzing by much too close.

Paul, Jeff and Heather deserve the greatest credit for doing that long section of the King’s Trail. (I saw the pending water problem, could not find a credible trail, and bailed, as I was a solo with different goals.  They continued and made it to the end.)  Once again Paul Hopwood proved that he is the best all around ultra/endurance runner in Hawaii.  He has some  competition, but my vote is for Paul.

I was not fully trained for this event, and I believe it showed in my times as I found it hard to maintain a constant pace approaching four miles an hour and in my inability to go beyond 18 or so hours.  Some of the time delay was caused by using super markets as aid stations rather than min-marts over on the Lahaina side;  one can become lost in a super market after 15 hours on the road.  I stashed on the back west side and this helped me there, but it would have taken a hard day of driving  to stash on the east side and I suffered out there as the teams were only near me on rare occasion.   I did most of this trek alone, so far ahead or behind of the teams that they could not help me.

Dehydration nailed me at the end of the Hana Highway around 55 hours and I found myself in a hallucinatory world where I was forced to concentrate on the few feet of road ahead of me and on keeping to the left side of the white line (I was blinded by the oncoming traffic and had to run on the right.)  The whirr of the tires down the road, the drifters and dusters coming so close, the total feeling of helplessness that overcame me as I stumbled down the cantilevered side of the road screaming ‘You can do this asshole, just quit f**king whining!’, was not  my most favorite moment of ultra endurance running.  No matter what the other wonderful experiences of this run, and there were many, I will always remember it as houffing it through those deep gouged out canyons along the western end  of the Hana Highway, fighting to keep my balance, surrounded by giant carved stone heads from Mayan like temples sitting amidst the castles of Kublai Khan, in cities built in the days of the Arabian Nights, all the while being tormented by speeding demons whipping by me at speeds far beyond comprehension.  Nothing was real to me except my feeling of total vulnerability.

My recommendation:  Don’t do this run!  It is madness. The traffic is too dangerous over portions of the course.   Perhaps the west side, in the morning, from Wailuku to Kapalua, is OK.  My suggestion is to start in Makawao, go up the Haleakala, down through Kaupou, and out to Hana (Much like Matt did), then back track toward Kula, then back again to the Kaupou gap and back up the Haleakala and down to Kula via the Crater Road.  This would be a good distance, much more peaceful, and if you run into problems out there on that run you are much less likely to be the victim of some cretin who beats his wife, torments his kids, starves his dogs, and tries to runs over mad assholes running along the roads.  If you are like me you would much prefer to fall prey to your own stupidity.

I will post a more detailed piece in a few days on my blog at https://runningovertheedge.blogspot.com/  you are welcome to view that if you like.   Aloha.  Mikem

I expected a post on this subject by Monday morning at the latest (that's Monday, Sep 21) but it now seems as if a landmark event is about to go unnoticed by the HURT community – which is why I feel the need to step in. While some of us were having a field day…

Aloha Athletes ! In a couple of hours (10:00 am) Paul Sibley will be starting from Aloha Tower on an epic run for cancer awareness to honor a young boy from Louisiana stricken with cancer.  Paul's run starts with a 135 mile, around Oahu, Perimeter run and with only a few hours rest, will finish with him…

For those of you interested in trying out some new terrain, there will be a group of us running our awesome top secret North Shore trails this Saturday.  If you want to join in on the fun, meet us at the Sunset Beach Elementary School (right across from Ehukai Beach Park) at 6 AM, Saturday,…

Aloha Athletes,We're in for a special treat this weekend, we have a member of our H.U.R.T. ohana, Jake Hinz, in town who will be with us hitting the trails and leading the run! Meet at the Nature Center at 6:30 (Yes 6:30!). The plan is to go for anywhere up to 24 miles with an…

Aloha HURT ohana!  Do you have a favorite recipe? Do you make one or two dishes that receive rave reviews every time you take them to a potluck? If so, then please consider contributing them to the very first H.U.R.T. cookbook. Cheryl and I are finally going to put together a cookbook with some of…