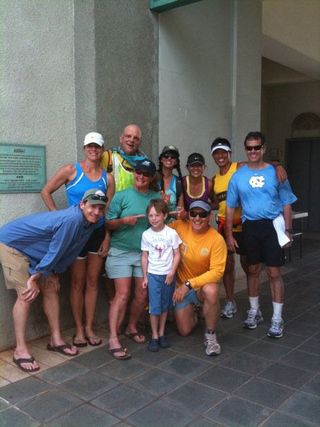 While going around the Point at 2am, Mike M says: "where'd all this MUD come from??"

Andy G showing up in Kapolei on Sunday morning in a kilt, playing bagpipes

Julie T:  "Whoever invented wet wipes is a genius!"

Seeing the smiles on faces of a bunch of ultrarunners who are out torturing themselves for 2 days on their feet, covering endless miles of road

Running up beside Paul S near Waialee on the North Shore to introduce myself, saying: "Hi, I'm Jan" and he replies: "I'm hurt."

The sense of joy and relief every time there was a support crew on the side of the road:  fresh smiling faces,  food, encouragement, people, food, a few good laughs, food, drink, and more motivation to keep everyone going.  And, food.

Julie running in slippers when we took off to catch up to Mike & Paul on the North Shore.

Heather: "I can hear you sleeping." (in Arvil's car at Dillingham)

Bananas and Gatorade.  You can live for days on it.

Bonita and Arvil's friendly, excited faces when meeting up with us Saturday night in Haleiwa

Steve telling us that Mike had carried a bite-sized Cliff Bar with him for about 30-40 miles.  Never opened it.  Never ate it.  Then up at Turtle Bay, he left it in the back of the van.

McDonald’s in Waianae at 5am Sunday.

Cheryl:  “You better slow down.”

Getting a mouthful of an expired Strawberry GU that I didn’t know was expired…. BULLECH!!!!!

The comedic moments of watching Mikey try to open a tiny ziplock baggie after 30+ hours, and saying "no, I got it".  Multiple times.

Cheryl driving my cup of Starbucks coffee from Kapolei through the next several aid stops, so I could stop and take a few gulps each time.  Sheds new light on enjoying a Sunday morning cup of coffee.

Cheryl’s extensive knowledge of Starbucks locations.  On the entire island.

Figuring out what works for you.  And what doesn’t.

Thinking that having only 30 miles to go is awesome.

When I finally got my pizza from Gordon Biersch.  I ate 5 slices on Sunday night and didn't feel an ounce of
guilt.

The finest example of seeing people look out for one another, and knowing that HURT is your ohana.

Cheryl, you were a rock for us the whole way – the best support crew we could have asked for.

Jan:   We were a great team – everybody working together is what makes it happen, not to mention it's just downright fun.

Happy Holidays to everyone! No formal training is planned for this weekend. Some people may be going out on their own or in small groups. Its taper time and also time to relax a bit and enjoy family and friends. The trails remain dry! Be safe out there and good training! Aloha, Bob

Michelle Regn having some fun up on Kuliouou trail.

Nick Kaiser submitted a few more pictures from this past weekend’s run. These photo’s show some of the H.U.R.T. "character’s" at their finest! Click on the photo’s to enlarge them. Here’s race director’s Cheryl and Don, eating all the aid station food. In this photo (notice their expressions and body language), Ed and Don are…

It's HERE, and on BLACK FRIDAY!  Tonight at 6:00PM at the Nature Center.  12 HOURS of Mayhem, Endless Suffering, and Regret.  Come join the Madness of the the HOGBACK 12 HOUR: ENTER THE DARKSIDE.  Come learn how you will feel as you stumble up the infamous Hogback trail on the fourth loop of the HURT…

Run To The Sun (unofficially and self supported) Saturday March 18th, 2011 0430 hrs from the Maui Mall in Kahului to the summit of Haleakala 10032 feet, 36.2 miles on the island of Maui. Come do the course as an individual or as part of a relay team. Unfortunately we haven't been successful in…

This past Saturday several of us were scheduled to run from the entrance of Ho’omaluhia Botanical Garden out to Waimanalo and back. This is about 30 miles. When I showed up at about 5:50 a.m. I was surprised to see so many people. As we gathered around in the darkness, I began to make out…