Following on Bob M's post, the UTMB thing is a lot of fun.  I did the CCC variant, which runs from Courmayeur in Italy, via Champex in Switzerland to Chamonix in France.  The part in the day runs takes you along the southern edge of val Ferret with amazing views north across the valley of the Mt. Blanc massif. The downsides are that there are so many people that it's hard to set one's own pace in the early parts on single file paths.  Also, the organizers are a bit overzealous with the regulations – the rule book runs to about 10 pages and talks of spot checks for bag weight as well as urine and blood tests.  I didn't see anything like that – but one of the guys I'm sharing lodging with got DQ'd because he was in the medical tent for more than 10 minutes, which seems a bit harsh.  Overall, the difficulty is a lot like the old HURT 100k (before it became 108k!).  But the difference is that the uphill sections are relentless – taking about 3 hours each.  As Bob mentioned, there is a huge attrition rate with people dropping out.  The most fun part of the whole adventure was coming to train, as the huts run by climbing clubs are great places to stay, and you get to enjoy the food, wine and general ambience a lot better that way. Here's a couple of pics of me at the start and at the award ceremony. 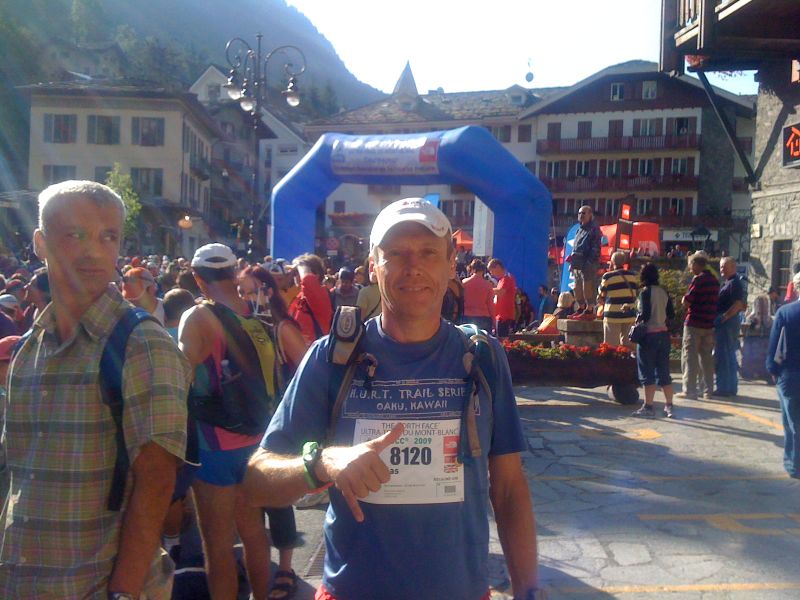 Dean Karnezes has been getting all of the attention but Pam Reed isn’t sitting still. She will attempt 300 miles on Easter weekend in the Tuscon area. Pam was the overall Badwater winner in 2002 and 2003. In 2004, she placed second behind Dean Karnezes Click here for the full article.

Aloha Athletes, This is kinda starting to sound like a broken record. There really are more trails on Oahu than Peacock and the Makiki/Tantalus trail system. We used to run them! (???) In any case, here are the options for Saturday up at Peacock. 7:00 a.m. when the gate opens in the parking lot behind…

First thing I must say is that it was a less than ideal time for us to do it.  I had gotten reinjured a week after the April HURT race and missed about four of the next eight weeks with no running whatsoever.  Gina was recovering from a recurring stress fracture (same shin as the…

Bob Murphy sent me a link to an article about H.U.R.T. 100 Finisher, David Goggins and his quest to run Badwater and to do it as a charity. Click here to read the full article in the Navy Compass.

I received some great photo’s of this past weekend’s Western States 100. The main photographer was Wendy Minor. Western States finisher, Judy Carluccio also sent me one photo that I incorporated into this album. Thanks for sending these! I have also learned Cheryl Loomis finished 3rd in her age group. Pretty Awesome!! You can meet…

The race is over. It sounds like the runners had much cooler weather this year. We’ll have to wait until they return to hear the "real" stories. Steve Dewald was the first Hawaii finisher at 26:35:34Former Hawaii resident, Judy Carluccio finished at 29:28:53Cheryl Loomis finished at 29:35:33. It appears Jeff Huff had a really tough…