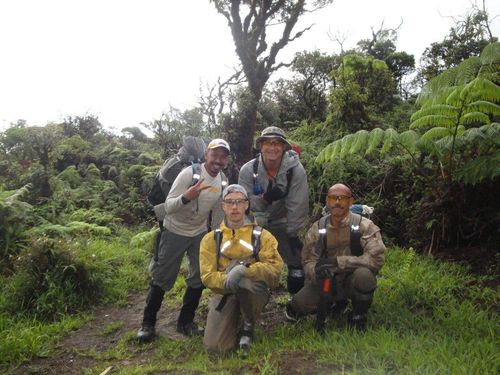 After months of preparing gear, testing equipment and dropping some stash the Memorial Day weekend finally arrived. Me and a couple HURT runners have made it a tradition to backpack the length of the Ko'olau Summit Trail (KST). It starts at Pupukea and ends at Kipapa trail. The Kipapa section is legally closed so will exit thru Waikane valley via Waikane trail. This year making the trip would be Ernest Tay (ET), Jim Masterson, the Fishman and me Gordon Lau dubbed the "Captain" since I was leading the way and always writing in my captains log.

Through past experiances with the KST we were all packing pretty light for a three day jaunt. Ernest had the heaviest pack since he was carrying about six liters of water. The morning of the first at Pupukea was beautiful. Cool and no rain. As we went further and climbed higher the weather started to change and it got windy and misty. The wind would stay with us for the whole trek. We bashed thru guava and uluhe fern past the Kahuku and Malaekahana trails and finally arrived at the Laie trail in the late afternoon. A short while later we reached the Kawailoa campsite. Hiking the KST is extremely slow at times. Maybe a mile an hour at best. Pitching our tents in the gusty winds was a chore.

We filtered our water from a nearby stream and made dinner. Freeze-dried meals and Ramen is the choice for KST backpackers. My favorite is the freeze-dried Lasagna! Just as the sun started to set it started to drizzle and get cold. Everyone settled in for the night. I didn't get much sleep that cold, wet and super windy night. I was glad when the sun started to light up the sky on Sunday morning. It was still cold and misty when we packed up and left Kawailoa. I had a good laugh when I came across a ribbon on the KST put up by Tom Yoza of the Hawaii Trail and Mountain Club wishing us good luck. He had come up Laie trail a week before to clear some of the trail for us. Mahalo Thomas!

The leg between Kawailoa and Poamoho is my favorite. It passes thru O'ahus pristine forest and bogs. Very close to the Hawaii hundreds of years ago. The KST thru Puu Kaainapuaa and the old Kahuku cabin area was very muddy but fully passible. When we reached the awesome lookout at the back of Kaipapau gulch we took a break from the cold and wet conditions. We shared Granola bars, trail mix and Jim's dried fish jerky.

After a short break we set out again on the windy exposed section above Kaipapau. This is where things got interesting! At this point Jim took the lead and I told him to hurry and get to the leeward side of the KST to get out of the rain and wind. Just as we got to the leeward side of the ridge and out of the wind Jim stops dead in his tracks. He turns to me and says theres a pig laying down on the trail! I peer over his shoulder and sure enough a pig is sleeping smack in the middle of the trail. We back up some and I give a few loud shouts but the pig doesn't move. My next plan is to move back further and maybe throw a rock on the sleeping porker. But before I can tell Jim to backup Jim yells "he's coming"! The pua'a is not a small one, at least a 100 pounds and pissed off that we woke him up.He rushes me and Jim grunting and with mouth wide open! I yell at the pig and he veers off past us and pass Fish and Ernest who didn't know what was going on! As the pig passed by I noticed he had no ears on his head! Thats why he didn't hear us try to wake him up. I never laughed so much that day!

The KST to the Castle trail was heavily overgrown and probably the worst section we went thru. We did lose the trail for a while. From Castle trail we passed the Army fenceline, Pe'ahinaia, the Cline memorial and our next campsite at the Poamoho cabin. I knew we would be warm and comfortable that night. We all had a laugh when my old hammock I brought to lounge on gave way and I fell on my ass! As said, the night was very comfortable. ( Sorry guys for the snoring) Our last day would take us thru the more scenic parts of the KST where the trail is cut out of the sheer walls of the Ko'olau mountain. We left the cabin and started our last leg of the trek. We took it slow as this was the dangerous part of the KST also. After passing Pauao ridge and the Schofield terminus we got to the top of the Waikane trail. From here we would leave the KST and head down Waikane trail to Kamehameha Hwy where my daughter, Katrina would pick us up.

I congratulated the guys for completing another cross KST hike and we started down Waikane. I was not looking forward to this section of Waikane. There are several sections where the trail has eroded and you have to walk on narrow ledges with sheer drops of hundreds of feet! We all past this creepy section safely and head steadily down hill. The weather changes drastically and it gets warmer and warmer. At this point Ernest has slowed up alot due to his knee and ankle injuries. He's a tough guy makes it to the dirt road and the long march out to Kam. Hwy. We reach the highway with Katrina waiting for us with a cooler of cold drinks. We have already made plans for next years backpack. This trip was very enjoyable due to the terrific guys I went with. They share the same love for the outdoors and backpacking and the challenges the KST presents as I do.

A big mahalo nui loa to my bruddahs Jim, Ernest and Fishman for another awesome backpack. Mahalo Ke Akua!………….

Aloha Athletes, Sorry for the delay in getting these results posted. What an incredible event. Many people deserve to be thanked for all the hard work put into this race. I'd like to start with Gordon Lau who had the early vision that a race could even be conducted up at Peacock. Certainly Larry Inouye…

Ko’olau Summit Trail Backpack This past Memorial Day weekend five HURT runners had a three day backpack of a lifetime! The group included Fish (Fishman) Ernest (ET) Larry, Jim M and me, Gordon Lau (Jr). We would be backpacking the Ko’olau Summit Trail (KST) from the Pupukea Boys Scout camp to California Ave via Schofield-Waikane…

The 2005 Swamp Romp was held today and H.U.R.T. was well represented by 6 women led by Cheryl. Other team members were Steph, Kat, Marion, Wendy, and Barbi. They all looked like they had a lot of fun. Click here to see photo’s of the event. Other H.U.R.T. runners participating on various teams were Steph’s…

Everyone! HURT Runners! Ken Michal (A HURT 2010 Runner and PODCASTER) needs our Help for the PodCast Challenge. Please log your miles for him by the end of May and he can WIN the PODCAST Challenge at BuckeyeOutdoors. FINAL PUSH TO THE FINISH! HE gave us a great podcast about HURT100 and now its our…

Most of you know &/or have run with JanM, who has been part of the HURT ohana for the last several years. She is soon moving on to new things on the mainland, and so we are planning an aloha send-off run of the Kuli'ou'ou Connector Trail Loop on Saturday, December 10th. The plan: Meet…

The Dewald boys, Lindsey and Jakob, as well the rest of their family, traveled to Wisconsin to participate in the USA Triathlon Championships. Jakob finished 9th in his age group and Lindsey finished 15th in his age group. Very impressive! Team Hawaii only sent 10 kids. Out of 15 teams some with as many as…