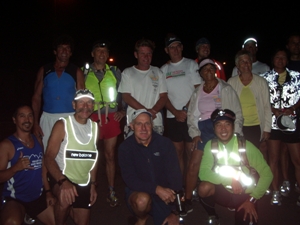 A small but determined group showed up at the Maui Mall ready to tackle the 36.2 miles to the 10,023 feet summit of Haleakala. We had about 7 solo guys and about 3 teams ready to take the challenge.
It turned out later that several others had started at different times and many had ran segments of the course. We kept running into people on the mountain at various stages. Karl Wirtl had started at midnight, several at 330 am and Paul Hopwood and Jeff Sanders decided to sleep in and wait for day light to start. They ran as a team and still beat everyone.
The first solo guy was an ultra from Alberta, Can. named Dave who finished in 6 hrs 2min. He said he had never ran a marathon just does trails in the rockies but runs once a week on the road just to get used to the pavement between 30-40 miles in -10 degrees C.
Nick Kaiser and Mike Muench did the Maui triple. Friday Poli poli state park to the summit about 14 miles, Saturday Kaupo Gap to the summit about 26 miles( 40+mph winds, verocious showers and near hypo thermic conditions, Sunday the finale RTTS 36.2 miles.
There was a 9 member womens team who probably had more fun than all combined. Jay, handlebar moustache, from Long Island NY was back for another assault. Several virgins from Kihei who made it solo.
All in all the weather threatening at first turned out to be mighty fine.
On the way down everyone stopped at Jim and Marne's house for post event party. Chili, stirfrys, desserts, snacks, beverages etc. Just tons of foods, good laughs and cameraderie. Definately the highlight of the day. And best of all no pesky, annoying, fun stopping park rangers.
Rumour has it we have a potential race director for next year so fingers crossed and if not we'll do it renegade/underground again.
Thanks to everyone for coming out, helping and making this a fun day
Bram

Someone sent me a disc with photos from this past weekend’s Volcano races. Was it Nick? Harald? Jozef? I am not sure. Thank you and next time, please include a return address or note so I know who took the photo’s.  Click here to view. OK, it was Jozef who sent these photos! Thanks Jozef….

Here’s a couple more photo’s–Nick Kaiser and Sally Skimin. (Click on the photo to see it larger.) Note the background in both photo’s. Only running up Haleakala can runners experience these breathtaking views. Awesome!! Sounds like we had a really lucky window of good weather for the race this past Saturday as it turned bad….

Aloha Athletes, We have received word that there will be another version of the "unofficial" Run to the Sun in 2011. The date is Sunday March 20, 2011. Starting at 4:30 a.m. at the Kahului Alehouse/Maui Mall. Again this race is completely unofficial and individual runners will have to be completely self supported for nutritional…

Ok Sean Miesser has won. Fukio from Japan second and Jamie Armstrong from Canada third. I was awoken by a loud thunderclap this morning at about 4:30 a.m. I guess that was my due for not toeing the line at the start of Run to Sun this year as that is about the start time….

The 2005 HURT Trail Series got off to a great start on Saturday, April 16, with the Top of Tantalus 7 mile run. The lookout at Pu`u `Ualaka`a State Park set the stage for the 53 eager participants as the sweeping, panoramic view featured a sunrise over Diamond Head crater, a blue Pacific Ocean with…

….Here M. Minch recounts the running adventure so named above, having taken place last Saturday and in the company of noted Ultra runners Ernest Tay and Fish.  (Note: a few explitives remain in this highly edited version of reality.  Somethings just can not be said any other way.)      After the Run with a…