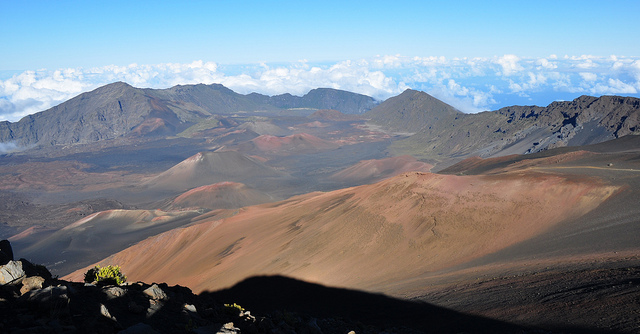 There are some people running the road to the top of the Haleakala mid-March in memory of a race that used to be held before the Feds got all pucker lipped sour and decided they couldn’t stand organized fun.  Some other people have been thinking it would be a good idea to do something else on Maui about that time too.  Since some other people ran around Maui last year that was kind of ruled out as the  neat thing for this year.  Somebody mentioned fast packing up the backside of the Haleakala, starting from the bottom of the Kaupau gap.  That sounded kind of cool.  Some other people realized that there is yet  another way up that hill too.

All in all it seemed  an interesting venture to attempt.  Hence was born the Maui Charm. Three summits of the Haleakala, on three consecutive days, along three separate routes. A true test of the old saying ‘Three's a Charm.’

As always this kind of insanity is unsponsored, unsupported, and unwise.  It is not for the average HURT kind of runner.   BUT it may attract a few people.  A half dozen dedicated souls seeking to find some sort of fulfillment in endless hours of physical stress, mindless pain, and psychotic levels of depravation would be optimal.

If you are interested in some real ‘March Madness’ and not just couch potato gut stuffing stupidity you are invited to contact me to discuss this jaunt further.  Also we have a couple of places still open for the February Round Kauai trek.  Mm

Aloha Athletes, Sunday March 20th some of us will be running The run to the sun course. As you know the previous race director has stepped down and we possible have an interested person for 2012. Never the less some of us are attempting to run the course. We would like to invite you to…

The annual TriLanai 3Hills 50Mile Bike Ride has added an ultrarun option – this is your chance to participate in the inaugural running of a new Hawaii ultrarun course, and will be the first official ultrarunning event to be offered on the beautiful island of Lana'i. This road run is being added to an established…

Race results from what sounds like a challenging Run to the Sun are now posted here. Congratulations to all the participants! Since I was not at the race, anyone have a race report they would like to post? Let me know and we will get it posted here.

Tomaszewski and Stevens Finish the No Ka Oi SufferFest in Record Time (click on photos to enlarge.  Go to http://share.shutterfly.com/action/welcome?sid=8BatHDNqybsNM for full gallery) Fyodor Dostoevsky wrote that only beauty and pain can truly penetrate the human soul.  This past weekend’s SufferFest had plenty of both to go around!  Day One had us riding from Kahului…

Kinda like Run to the Sun ….Sort of.  Some runners from the mainland are interested in getting out of the frigid cold so… To be accommodating to our visitors we came up with Saturday March 6th. So it will be a TOTALLY UNOFFICIAL event, you'll be responsible for your own transport, park entry fee, nutritional…

Another in the Madness Series…..   Time: 6:00PM Friday November 26th to 6:00AM  Saturday November 27 Place:  Hogback (of course!)  Nature Center Picnic Table.  The Route:  Inner loops (Hogback, Cross-over, Center)  repeated. Bring your own stuff, though there will be some refreshments there.  This is a great test of stamina and fortitude over that bit…