Even for the trail/ultra die-hards out there who shun the roads and any distance less than a 100 miles, you have to watch the last 3 minutes of today's Chicago Marathon.  Entered in the race were no less than 4 guys who had PR's in the 2:05's, all between the ages of 20-23.  Wanjiru, the Olympic champion and North American record holder went head to head down the stretch with Kabede, an Ethiopian runner and current London Marathon champion.  After Kabede's repeated attacks which would not stick, Wanjiru finally surged after the second to last turn with 500 meters to go.  The drama was only heightened by the fact that whoever won this duel was going to walk away with a cool $500,000 for taking the World Majors points title.  Tony Reavis, the announcer, was also on fire, at one point stating that Kabede's tough pace was like "taking a baseball bat to the other runners" and Wanjiru's "football" sized balls were also mentioned after Wanjiru put on his final move.  Enjoy the footage below.  The photo was of Wanjiru holding Nate after he won last year's Chicago Marathon.  We are trying to figure out how to get Wanjiru to train Nate to kick like this in the late stages of big races!

VIDEO LINK: Wanjiru Opens Up a Can on Kabede 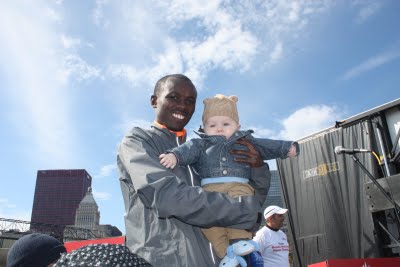 aloha guys and gals, slight switch for Sunday’s run: in order to avoid wasted time in cars, we are going to meet at Maunawili Park, do Olo Mana’s 3 peaks, go through the irrigation tunnel of death and then proceed back to the hairpin turn and then back to the cars.  This will be a…

For Saturday the post time is 6:00 AM  and the distance is a HURT Loop.  The Departure point is the top of Manoa Road, as parking is easier and usually safer there.    Check out the HURT turkeytrot  loop in the previous post.   If you are going out at another time, please post it…

All: Everything "found" at the Peacock race has been left at Runners-Hi.  If you lost something, please check there.  If you still can't find it, it's probably been sacrificed to the trail gods.  If you still haven't received a finishers visor or t-shirt, please e-mail me.  I'll try to get everything sent out this week if possible….

First, the wallet Happy ending!Ryan Seto looked in his bag after the dinner, and found the missing wallet. He called me at 11:30 (we were still up, unwinding), so I gave him the owner's phone number, and we left a message for the owner too.Long story short, Ryan spoke to the owner and drove his…

Aloha Athletes ! Well folks, it looks like I'm totally out of the loop. All I have for you for this Saturday is "5 am at the bottom of Long Road" and "maybe some will want to do Top of Tantalus", sooooo, hopefully some of you can post comments on what your plans are. The…