How Super Pig Saved the Maunawili Out and Back

Rumors were flying….the Maunawili Out and Back was in jeopardy. Talk on the street was that there were these
two badass pigs, Leatherface and Scar, plotting to take out innocent runners as
they attempted to make their way along the Maunawili Trail on August 1. 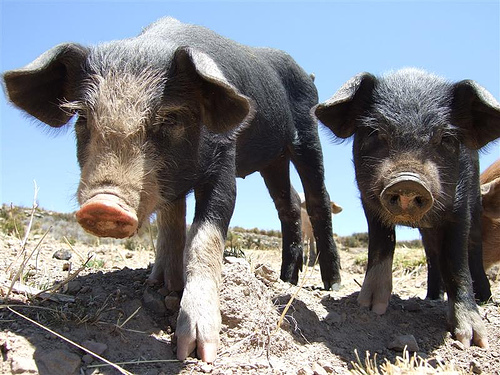 Their evil plan was to hide in the overgrown cat’s claw
waiting for an unsuspecting runner to come flying down the trail.  Scar, being the smaller and less intimidating
of the pair, would jump out onto the trail in front of the runner, startling
the runner and forcing him or her to stumble and become unstable.  Leatherface would then attack from behind,
and push the poor runner off the edge of the trail.  They would delight in their deft skill and
ingenious plan.  One by one, they could
stop the entire field of runners.

Somehow, mild-mannered Don Fallis caught wind of this
devious plot.  He could not stand by and
allow this favorite race of the HURT Trail Series become victim to these badass
pigs.  This was a job for Super Pig.  Don stepped into his office in Kaneohe
wearing sweat pants and a HURT Trail Series Patagonia shirt, and stepped out in
this: 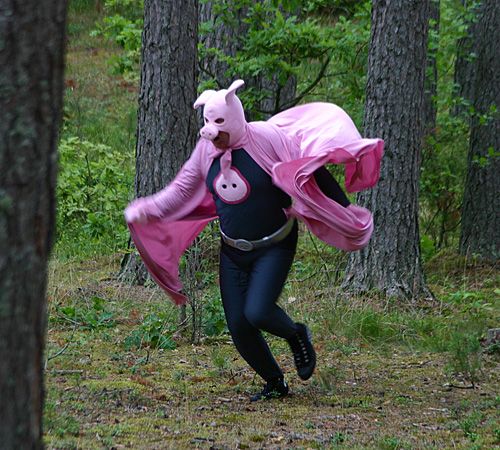 Super Pig made his way to the hangout for the thug pigs,
Leatherface and Scar, and opened up a can of whoop-ass.  They were overpowered by Super Pig’s tenacity
and bravery (just like that silly old cancer was), that they put their tails
between their legs and ran for the hills like the panties that they really
were.  Once again, Super Pig saved the
day!!!!

Now everyone can enjoy the beautiful Maunawili trail on
August 1 starting at 7 a.m. and run with the nice pigs, like Steve and Matt: 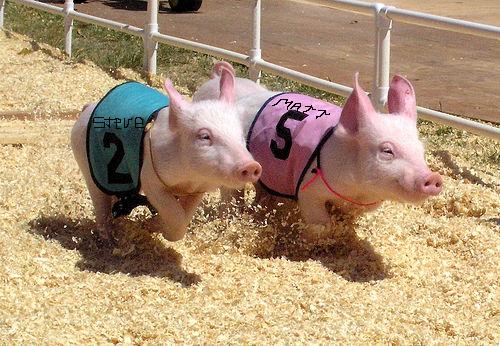 Matt is leading by a snout…..

·
Arrive at the start no later than 6:30 (our
supreme parking tsar will direct you to park on the road leading up to the
parking lot – no bathrooms are available)

·
Please be diligent about leaving no trace out
there – absolutely no littering!

·
The race start is staggered, based on gender and
age

·
For additional information, call Marian at
221-5171 or email mnyasuda@hawaii.rr.com