I received the following from another runner via e-mail. I decided to post it so all of you are aware. If you have any questions or comments, please use the "Comment" link at the bottom of the post. Run safely and carefully out there!!

just got back from running the kealia trail at dillingham.  it was the second time i’ve run there, the first being with mike, don and hurt group last summer.  i didn’t know that peacock flats is a popular hunting ground for local outdoorsman and you may want to post a warning on your website since i almost got shot two times today!!

i parked at the airfield where there are no warning signs about hunters, ran about an hour up the mountain before my first near miss.  i rounded a corner and a hunter raised his gun out of surprise.  he was friendly about it, apologized and although i was scared i continued on thinking this was an isolated situation.  another half hour i rounded a bend and again, a different hunter swivels around with upraised rifle!  he was not so friendly and told me i "could have been shot!"  no kidding!

at this point, i decided not to press my luck and to turn around and head home.  on my way back, i ran into 3 more hunters with a dog.  the dog was friendly!  the hunters this time warned me that i shouldn’t be running and should be wearing orange!  how the %*$! was i supposed to know?  i told them that in my short run i was almost shot twice and they told me not to worry, they "use only shotguns."  is this supposed to console me?  shotguns?  as opposed to what, grenade launchers???"

although i was scared $%&#less, it was a beautiful run nonetheless, but i won’t be returning to kealia until hunting season is over.  it was a most surreal experience, the beauty of the trail and views punctuated by a couple of near-death episodes!

please warn trail runners if they don’t already know about this potentially deadly risk.  i also think that the park service(?) should be notified and warning signs posted at the entrance and along the trail for runners, hikers and tourists.  it somehow seems highly dangerous and irresponsible that this
hasn’t been addressed.  or has it? 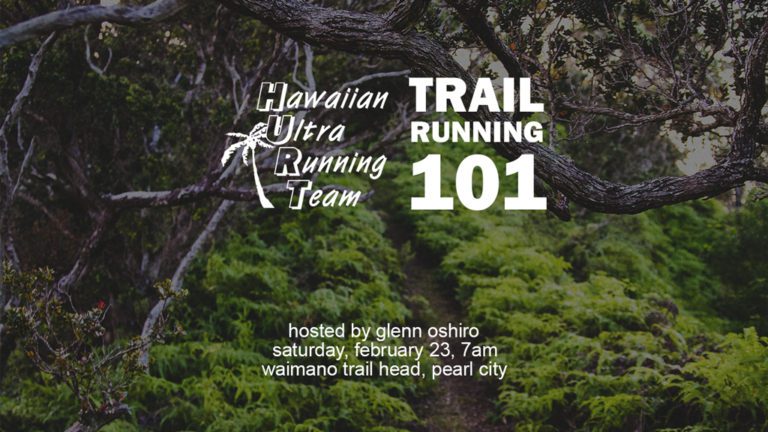 If you’ve ever contemplated running in the trails, but find yourself intimidated by hills and uneven terrain, this clinic is just for you! Join Glenn Oshiro on a beginners guide to trail running along the scenic Waimano Ridge Trail. He will cover the basics and lead you on a roughly four easy mile run. Meet…

Some last minute stuff about where and what :

Aloha Athletes ! It’s back to business as usual with a HURT loop this Saturday. If your name is on the roster for the upcoming HURT 100 race, you may even want to do a second HURT loop. Let’s meet at the usual Manoa location at the end of Manoa Rd. at 5:50 am to…

To all the inspiring people of the ultra community, I am attempting to give back for many reasons using my feet.  Beginning this December 12th, I will embark on an attempt to solo the island of Oahu followed by the Honolulu Marathon culminating in 160 miles of running over 48 hours (or so).  Why?  This…

I came down the Kealia Trail last Saturday morning convinced that I was done. I had 38 miles on my feet and was ready to call it a day, and more importantly my quads were telling me they didn't like me very much.  But when I got to the bottom I let the morning crowd…